Web Seed Request Limiter
This feature limits simultaneous web seed requests to prevent the overload of servers when downloading many different items from the same source.  Some servers will throttle remote addresses that are the source of too many requests.  This feature was designed to prevent that.

The limiter configuration can be found in Settings > Transfers > Peers.  There is a button near the bottom to edit the configuration of the limits. 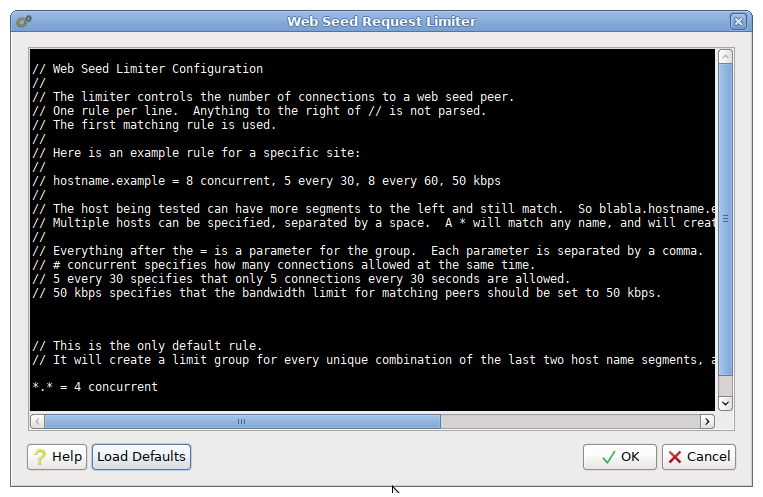 The syntax is fairly simple.

There is one rule per line.  Each line describes a group of hosts that will be collectively limited, followed by an equal sign, and then one or more limit parameters, separated by commas, that control connections to matching hosts.

Each line starts with one or more host names.  Multiple names can be separated by a space.  A host is matched if it ends with any of the host names in the rule, so the host www.mydomain.example would match a rule that specifies mydomain.example.

The default rule's *.* match will cause connections to each unique combination of the last two segments of a host name to be throttled as separate groups

The parameters are everything to the right of the equal sign.

The first part will allow no more than 8 simultaneous connections.  Then connection initiations are rate-limited to 5 every 30 seconds, or 8 every 60.  The last part limits any single connection to 50 kbps.